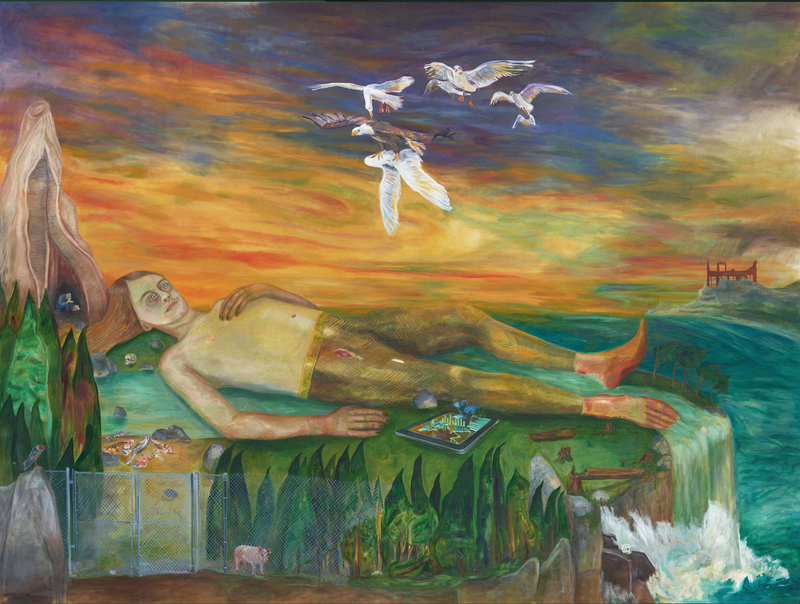 A Fantasy of Transcendence and a Preoccupation with Downfall and Ruin (2019) is the tour-de-force in Jill Mulleady's exhibition at Swiss Institute. Elements inspired by Bruegel's The Land of Cockaigne surround an artificially intelligent colossus, reclining in a dystopian landscape afloat in a horizonless sea lit by an acidic sky. A bald eagle rides on the body of a headless seagull as a forlorn pig stares out from behind an industrial gate. Dead fish lie belly up, a vulvic cave hovers over an old man and his pet pig, and a desolate, orange-eyed bird appears like a mute oracle. Everything is half-dead or in crisis, except for the tablet that sings with bright pop-up charts and floating numbers.

Other works draw inspiration from the space's origin as a bank and add to the alarm, depicting an industrial pipeline with a deranged mouse, and a mysterious vault in the back of a dark room. Upstairs, four woodcuts portray a crazed rat riding a pair of terrorized horses across an apocalyptic cityscape, reminding the viewer of time's passing and erasures.