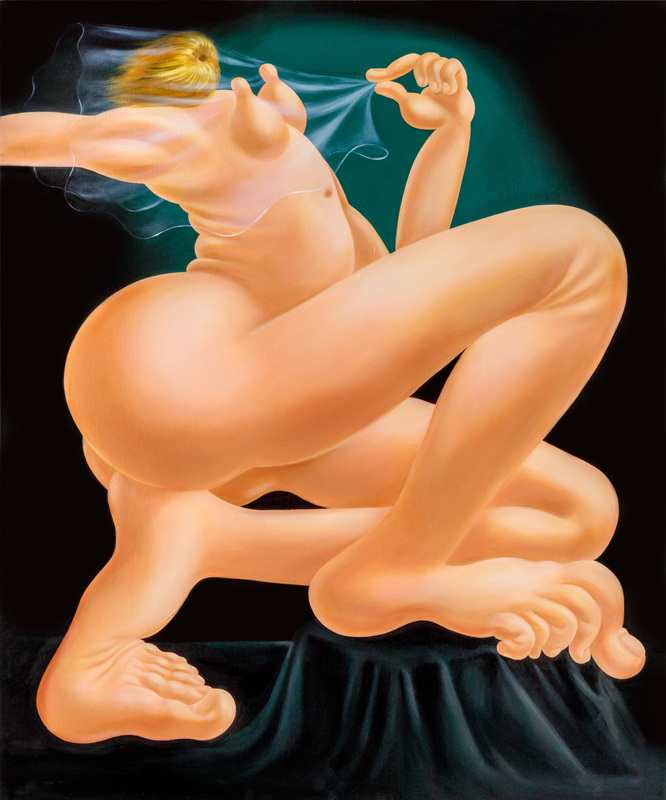 The headless woman appears through art history, from gorgon neutralized to Crumb's ultimate misogynistic sex object. Bonnet owns the troubling metaphor, and her monsters lurch and contort, trying to approximate muse-like poses. Hollywood 1 and 2 (all are 2019) expose rippling expanses of glowing flesh, the fresh pink of Boucher or Botero without the dainty heteronormative propriety.

The bodies recede in proportion, from giant feet, thighs, and buttocks to nonexistent heads, with occasionally a drip-like nose pulled from another cartoonist, Don Martin. Others present what are traditionally the selling-points of the female body, as in Roped Butt or The Patriarchy, in a meat-in-a-butcher shop milieu. In The Patriarchy a pair of breasts, equal in volume to the rest of the torso, are supported by a net hanging from some branches. Bonnet's smooth handling of the paint makes the puckering flesh through the netting a poignant gesture. Other figures, clothed, hiding, and often weeping, mourn the failure of their efforts to shift the scales weighted against them.